Alaska, the Last Frontier is an exciting show. If you frequent the channel regularly, you have likely heard of the Kilcher clan. The show revolves around them. Shut away from the remainder of the world; they grow their food, hunt, and fish to sustain themselves.

Engaging, daring, and bold, is the only way to define their seven seasons run, and they are not looking to stopping anytime soon. The favorite show has thrown the family it revolves around into the limelight. In this article, we will explore their extensive family tree. We will try to shed some light on all of the members of the family and their own married and dating life. The Kilchers are an exciting lot, and as such, will make for an interesting read.

At the root of the Kilcher family are Swiss roots. The family has deep ties to Switzerland. Their patriarch, Yule Kilcher, is originally from Switzerland. The man was born there in 1913 and would spend 23 years in his motherland before he ventured out into the rest of the world. Due to the tension and inevitability of a second world war, His friend and future wife Ruth Weber, with the war now a certainty and all but imminent, caught the last ship living their home country to America in 1941 and joined him.

The pair would tie the knot soon after, settle down, and start their new life without the threat of fear looming in the background. The couple would go on to produce eight children during their lifetime together, two sons and six daughters. They include Atz Kilcher, Otto Kilcher, Catkin Kilcher Burton, Stellavera Kilcher, Wurtilla Hepp, Fay Graham, Mossy Kilcher, and Sunrise Sjoberg.

The two brothers, Atz and Otto Kilcher, would carry on their father’s legacy and build the second generation of Kilchers. 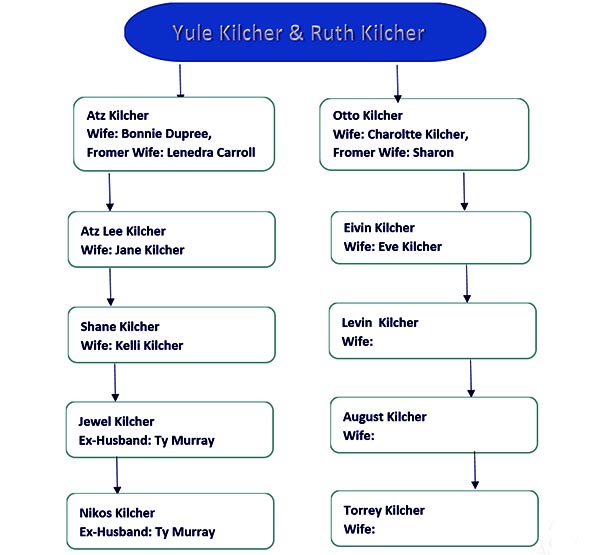 Atz Kilcher, the eldest son of Yule Kilcher, was born on September 2nd, 1947 and is a native of Homer, Alaska. So, he is 71 years old at the moment. Growing up in his family meant that you had to learn how to survive in the harsh Alaskan landscape. To this end, he turned to his mother, and she taught him everything she knew. The woman also taught him the value of music, and it stays a big part of Atz life to this day. The man has had quite a few relationships under his belt. His first wife was Lenedra Carroll. The pair would have three children together: Shane, Atz Lee Jr, and Jewel Kilcher.

Lee would also enjoy a romantic fling with a woman named Linda, and this would lead to the birth of his fourth child, Nikos Kilcher. Presently, the old man is married to a woman named Bonnie Dupree.

Otto Kilcher is the sixth born in his family. Like his siblings, he was born in Alaska, in 1952 which would make him 66 years old at the moment. Whereas his brother’s passions were deeply rooted in the music, Otto found himself in love with mechanics. The man loved to tinker with and fix all sorts of machinery. He mastered the craft while he was still very young and has since gone on to develop his skills even further.

Like his brother Atz, Otto was also married more than once. His first wife was Olga Von Ziegesar. The two would divorce even before they had any children. The Alaskan native would then move on to date and eventually marry Sharon Mackie. This time, he would go on to have two sons: Eivin and Levi Kilcher, before splitting up with her. He would go on to marry a third wife, Charlotte Kilcher, and this time, he would do everything to make it work. The two have one child together, August Kilcher. Like her husband, his current wife was also married before they met, and even had a child with this other man. Her other son’s name is Torrey.

Shane is the eldest son of Atz Kilcher and Lenedra Carroll Kilcher. He celebrates his birthday on May 5th, 1971 in Alaska makes him 48 years old presently. Shane is a reality star whose name and face became recognisable after his stint on the show, Alaska: The Last Frontier.

The star would go on to marry his high school girlfriend, Kelli Ware Kilcher. The two have had a beautiful life together, growing stronger in their bond with each passing year. Their union which was blessed with four lovely kids: Keena Tarik Kilcher, Jareth, Reid and Jenna Kilcher.

Much like her brother Shane, Jewel Kilcher is also part of the third generation of Kilchers. Her date of birth is on the 23rd of May, 1974, and is the second-born child of Atz Kilcher and Lenedra Caroll. Music is something that always ran in the Kilchers blood, and Jewel took this to the next level as she became a renowned musician. At the age of 45, the star has already received four Grammy Award nominations and has sold over thirty million albums globally.

The musician has one son, Kase Townes Murray, from her marriage to pro rodeo cowboy Ty Murray. The marriage only lasted six years before they split up. After her divorce with ex-husband Ty Murray, she began dating football player, Charlie Whitehurst and the pair even travelled together to Australia for Jewel’s concert in Perth.

Atz Lee Kilcher is an America reality star born on August 26th, 1977, which makes him 41 years old at the moment and will be soon turning 42 years old. His is the third born child of Atz and Lenedra Caroll. Jane, his wife, came to this world on September 14, 1975, which makes her 44, about three years older than her husband.

They were both married then divorced once when they met and cultivated a married life together that has trickled down on the screen. Both are part of the show, The Last Frontier. They tied the knot in 2005. Both Atz Lee and Jane had children before they met. The former had a son, Etienne, who is now 16 years old, with his first wife. The latter had a daughter from her first marriage, Piper, who is now 15.

Nikos is the youngest of his siblings. Nikos was born on the 7th of March, 1984 to Linda and Atz Kilcher. There is not a lot of information available on his mother, or even Niko’s early childhood for that matter. He did, however, go on to marry a woman named Kate. However, the pair is yet to conceive any children together. At the moment, they remain childless.

Eivin is the son of Otto Kilcher and Sharon Mackemie. He came into this world on the 6th of March, 1983 in Alaska. Like his father, Eivin developed a penchant for fixing machines. He was very adept at handling machinery and landscaping. The reality star would marry his childhood sweetheart, Eve Matkins. The couple has two children together so far; a son named Findlay Farenorth Kilcher, and a daughter named Sparrow Rose Kilcher.

Levi is the eldest son of Otto Kilcher and Sharon Mackemie, his second wife. He celebrates his day of birth on the 9th of March, 1981 which makes him 38 years old as of 2019. There is relatively very less we know about Levi

August was born in 1997, in Alaska, to parents Otto and Charlotte Kilcher. His mother was his father’s third wife. The young man is 22 years old at the moment. So far, he has shown an affinity for music, as some of the other members of his family. August also has a thing for drama, and he has the vocal ranges to back it up. But this should not fool you, as he is much more than just his art. Growing up in the harsh Alaskan conditions has made him as tough as the rest of his family.