Mike Phillips’ wedding came as a shock to many as fans didn’t even know for sure that he had a girlfriend. The former rugby player hasn’t yet revealed his wife’s name. Here’s what we know about his married life so far.

Mike Phillips got married in 2017! What’s his wife’s name?

Phillips delivered back to back shocking news back in May 2017. He retired from rugby that month and a few days later revealed that he had tied the knot with his girlfriend. 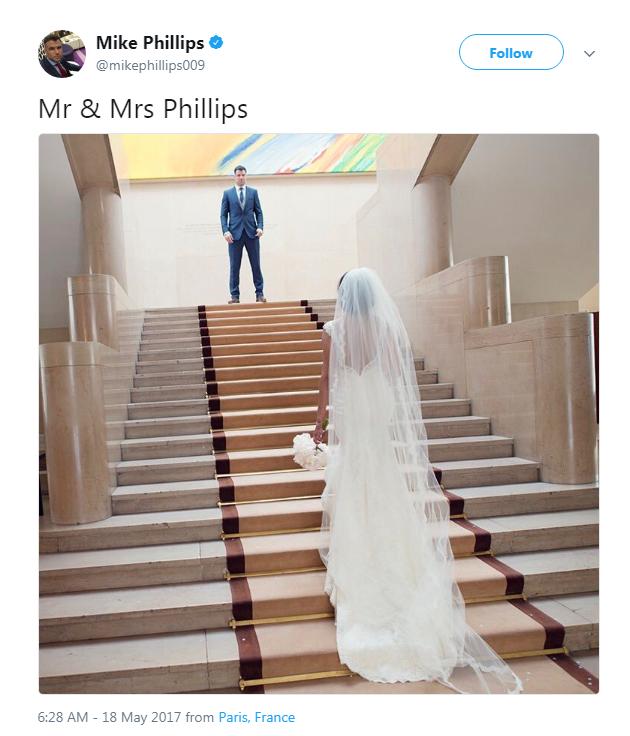 Mike Phillips and wife on their wedding day

On May 18, 2017, Phillips took to Twitter to share a photo of him and his bride on their wedding day. It was reported that they had a small wedding in Paris, France. He captioned the photo, “Mr and Mrs Phillips.”

It seems like Phillips is quite reserved when it comes to personal relationships. His wife had her back turned to the camera so that fans wouldn’t find out who she is. The handsome athlete has never revealed his significant other’s name or face to fans.

His former teammates were ecstatic for him as were his fans. But several commented that it was the “worst day” of their lives!

The former Wales scrum-half hasn’t really shared much about his dating history. Previously, he dated Grammy Award-winning singer Duffy. They began dating sometime around in 2009 and reportedly split in mid-2011.

Fans stalking Phillips’ Instagram for more info on his dating history or mystery wife would only be setting themselves up for disappointment as he has never shared photos of his ladies.

Maybe that’ll change in 2018? We’d love to find out more about the rugby icon’s wife.